Study: How Effective is Dog Grooming in Eliminating Bacteria? 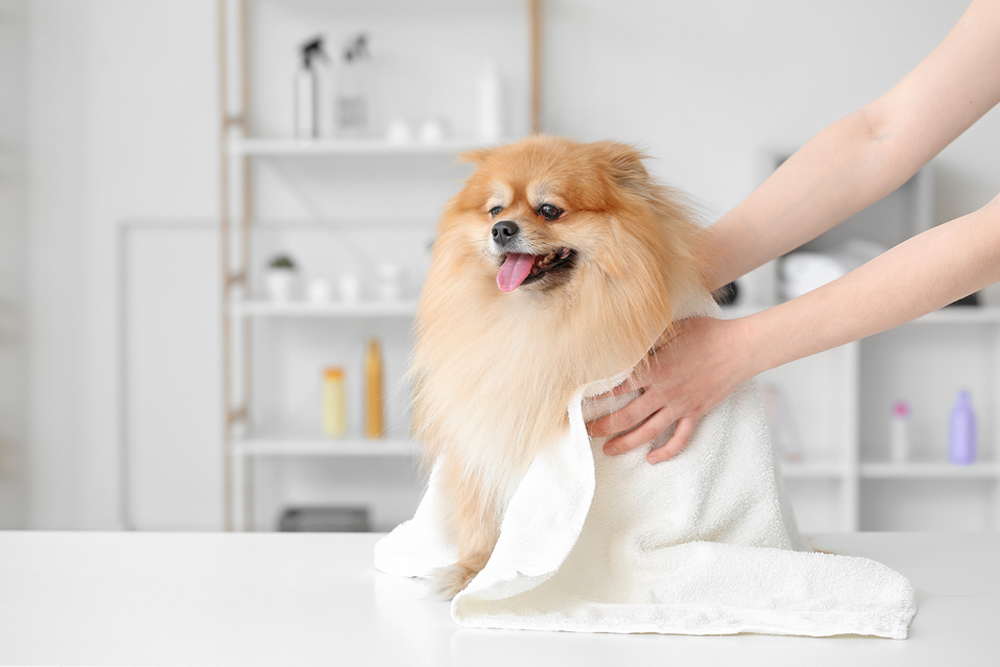 On the surface, dogs look like cute, cuddly animals. But under a microscope, things aren’t as adorable — oftentimes, they’re covered in bacteria, from nose to tail. To see how effective professional grooming is at eliminating unfriendly organisms from your best friend’s coat, mouth, and paws, we studied bacteria and fungi levels on dogs before and after a fresh groom. A lab-tested germ swab analysis test gave us insight into which germs and how many were present.
‍

We conducted six total gram and stain culture swab tests across the fur, mouth, and paws of a dog before and after a professional groom Each surface was swabbed three times before and after the grooming session. Colony-forming units (CFUs), a count of how many living germs were present, were averaged for each surface type. Read on to see what good hygiene can mean for you and your dog.

The Power of Cleanliness

Dogs don’t just look better after getting groomed; they also smell much cleaner. But just how much of a difference does it make?

Our studies show that the amount of bacteria on the average dog drops massively after a thorough groom. The swab analysis used identifies which types of germs and the total colony-forming units (CFUs). CFUs are a count of the fungi, viruses, and good and bad bacteria present in a sample. We swabbed a dog before and after getting groomed and found a huge difference in their fur and mouth: 34.7 million CFUs fell to just 10 on their coat, while 6.1 million CFUs were reduced to 140 in their mouths, on average.

On the other hand — or, perhaps, paw — we didn’t find quite the same change closer to the floor. Dogs’ paws had an average of 6,500 CFUs before grooming, and that number only dropped down to 3,200 CFUs after getting groomed. With all those nooks and crannies in constant contact with the ground, it can be hard to clean those toes. So, make sure those feet get extra attention when it’s time for a scrub!
‍

A deep clean doesn’t just keep a dog’s external hygiene in check; it also protects their feet and joints and allows for quick detection if anything is physically wrong with your pup. Long nails can force your dog to change its way of walking, leading to bone deformations and arthritis if left untreated for too long. And unkempt ears can be a gateway to infections, mites, and other unpleasant ailments. These are just a few reasons, while DIY-ing a thorough cleaning might save you money, it’s worth having your dog groomed professionally.
‍

Not only will a professional groomer pull out all the stops with a meticulous brushing, bathing, trimming, and nail clipping process — but their expertise and up close inspection of your pup also means they’re more likely to notice if something’s amiss. Plus, they have the best tools and products for making every dog feel like royalty, no matter their size, age, or temperament.

Digging in the Dirt

Next, we got nerdy about the microbiology of what’s likely to be lurking on your dog on a regular basis. Let’s take a look at the types of bacteria and fungi that may be on your pup before and after cleaning.
‍

Scientists and health professionals use staining, a method that dyes bacteria in different colors, to differentiate between gram-positive and gram-negative bacteria under a microscope. Staphylococcus is an example of gram-positive rod bacteria, the germ responsible for staph infections. One type of gram-negative bacteria is escherichia coli, otherwise known as E. coli. This bacteria has the potential to bring on a slew of unpleasant issues like cholecystitis, bacteremia, cholangitis, and urinary tract infection (UTI). While both types can be dangerous in too high a number, gram-negative bacteria can be especially harmful due to their high resistance to antibiotics.
‍

Staining also allows us to tell bacteria apart by their shape, which is how we discovered the round (cocci) and long (rod) bacteria living on the average dog. Gram-positive rods are usually helpful probiotic bacteria, but they also have the potential to be pathogenic (disease-causing). Gram-positive cocci are organisms more commonly associated with infections.
‍

We weren’t surprised to find bacillus — a type of cylindrical or rod-like bacteria commonly found in water and soil — present on their paws. Some bacillus can be harmful to humans, so it’s great news that grooming cleaned all 1,200 CFUs of it away. The gram-positive cocci, however, did not dip nearly as much: only decreasing from 5,300 to 3,200 CFUs.

Thankfully, the types of bacteria we found on dogs aren’t harmful to humans. And although a dog’s mouth contains the highest diversity of bacteria compared to other parts of its body, it was almost spotless after a good brushing.

Which Is Dirtier: Your Dog or Your Home?

While dogs accumulate quite a bit of bacteria between cleanings, the same can be said about household items. So, which has more germs, your pet or your possessions?
‍

Again, we used a dog’s fur, mouth, and paws before grooming to gauge their levels of germiness. But this time, we compared the data to everyday things around your house. In all instances, the dog had more bacteria than the items we tested.
‍

Before getting groomed, pups were incredibly filthy compared to their humans’ headsets and kitchen countertops — 14 to 18 times filthier, to be precise. Whereas after a good grooming, the CFUs were nearly undetectable: fur (10 CFUs), mouth (140 CFUs), and paws (3,200 CFUs).

But just because your dog is dirtier than your home, doesn’t mean that you shouldn’t tidy up as diligently as you do with your pet. Remember to sanitize your household items after cleaning, as it reduces the remaining germs on your surfaces. By killing the germs, you minimize the risk of spreading disease, protecting yourself and your loved ones (with and without fur).

As you might have guessed, getting your dog groomed drastically improves their hygiene and protects their health. Examining dogs’ fur, paws, and mouth showed that they’re nearly squeaky clean after grooming, except for those paws. But dogs don’t normally wear shoes, so who can blame them?

Regardless, getting your dog groomed frequently and professionally are the two best pieces of advice we can offer. Grooming has more benefits than silky, smooth fur, and an expert will have the tools and experience needed to provide any pup the care they deserve. Treat your pet like the king or queen that they are, and keep them clean!

Please note: Barkbus did not conduct the grooming for this study. Our research team conducted six total gram and stain culture swab tests across different body parts of a dog at a grooming facility. Each surface was swabbed three times prior to and post grooming. Colony-forming units (CFUs) per swab were averaged for each surface type. This content is exploratory since, with a larger sample size, we might have gained more insight into CFU levels. No statistical testing was performed, and the claims listed above are based on means alone.

Now that you’ve gotten into the nitty gritty of dirty dog fur, feel free to share our findings with any dog lovers you know. We only ask that you do so for non-commercial use and provide a link to the original page so the contributors can earn credit for their work.

Best Dog Treats of 2022, According to Groomers

How Often Should You Bathe Your Dog?

How Often Should You Groom Your Dog?

Why It’s Worth Having Your Dog Groomed Professionally

Study: Do You Know What’s In Your Dog’s Food?

Return to Office: 10 Tips for Bringing Your Dog to Work