How to Read Dog Body Language: Common Gestures and Expressions 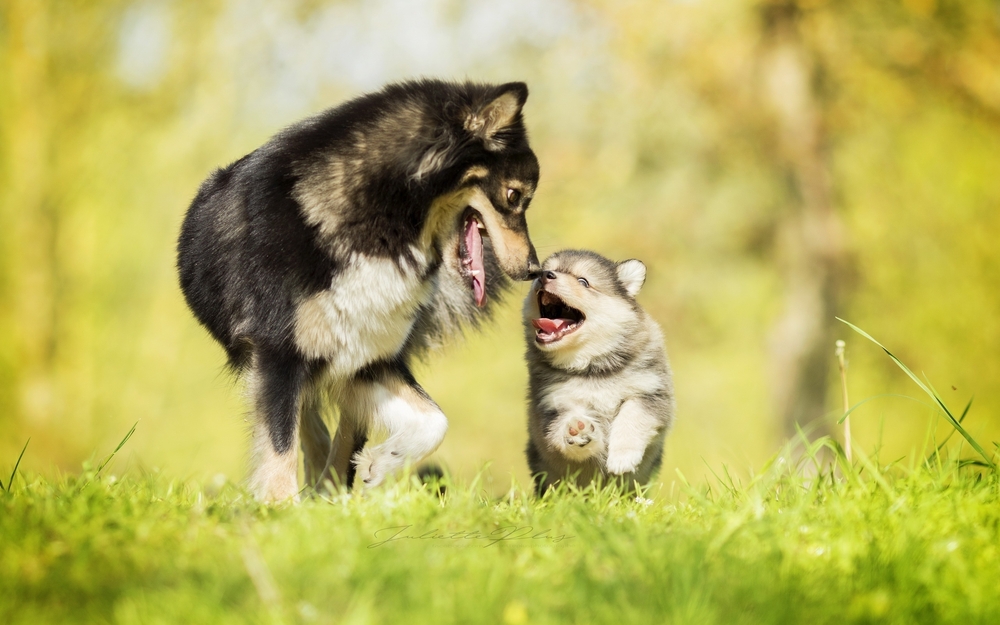 Dogs are extremely expressive animals with many different mannerisms, behaviors, and barks that convey a wide range of emotions. As a dog parent, you’ve likely wondered what your pup is trying to tell you by reading their body language. Understanding dog behavior can be very tricky — while some may bark to attract your attention, others will use a more subtle (or complex) array of gestures, postures, and other forms of communication.

The following guide takes a deep dive into the fundamentals of canine body language, but keep in mind that the physiology of each dog can differ substantially across breeds, and so these gestures may be more or less pronounced accordingly. For example, dogs with drooping ears like Springer Spaniels are unable to communicate using their ears in the same way that some other breeds can.

The easiest way to learn how to read dog body language is to determine what each body part conveys. Read on to familiarize yourself with your dog's body language!

Observing a dog’s ear position can provide some insight into your pup’s general mood. Here’s what it means when your dog’s ears are lowered or perked up.

What does it mean when dogs lower their ears?

When dogs lower their ears, it’s often a sign of submission or non-aggressive emotions. By lowering their ears, they’re reducing their perceived size so as to appear less threatening, which is often used to avoid confrontation or to placate others. It can indeed be considered as submissive dog body language. The degree to which your dog’s ears are lowered will vary depending on specific feelings they are expressing. When the ears are entirely flattened or pressed back, it’s likely that your pup is extremely frightened. Otherwise, if their ears are simply lowered, your pup may be trying to communicate their desire to appease another companion in the room.

What does it mean when dog ears are perked up?

A dog can sometimes raise its ears in an attempt to feel bigger and more intimidating. In these situations, the dog may be signaling aggression, or that it is feeling threatened. However, when a dog’s ears are angled forward, it can mean your pup has a particular interest in something around them. Dog signs like this can indicate curiosity or focused attention.

Looking for a tell tale sign on your dog’s overall mood? Look at your dog’s tail. Here’s what your pup’s tail movement or position tells you about how they’re feeling.

What does it mean when dogs wag their tail?

It’s often assumed that when a dog wags its tail, it’s always a sign of happiness or excitement. While this is sometimes the case, the reality is a little more complicated. It can depend on the precise position of the tail when it is being wagged. For instance, tail wagging at medium height can indeed suggest enthusiasm or pleasure. However, tail wagging at the highest position can suggest dominance.

Similarly, the speed and breadth of the wagging can also communicate different things. A small wag often indicates a cautious or tentative greeting. Conversely, a broad wag communicates that the dog is happy and feeling friendly. When a dog’s tail is wagging rapidly but with small motions, however, it could be an indicator that the dog is preparing to run or attack.

What does it mean when dogs hide their tails? Is this submissive dog body language?

Dogs lower their tails to present a smaller or more submissive figure of themselves. This is intended to portray themselves as less threatening. As such, dogs do this when they’re experiencing fear or anxiety. However, it’s important to note that it can also be a sign that your dog is feeling unwell. If they’re exhibiting this behavior for an extended period of time, or show other signs of illness, contact your vet immediately.

What does it mean when their tail is between their legs?

As explained above, when it comes to dog tail language, a lowered tail communicates that a dog is submissive, anxious, or unwell. The lower the tail drops, the more extreme their feeling of fear or anxiety. As such, when a dog’s tail is tucked between their legs, it means they are likely feeling intense worry or concern.

We receive many questions about what a dog’s mouth and tongue activity indicate. Here’s what it means when your dog is showing its teeth or panting.

It’s a common misconception that when a dog bares its teeth it automatically means they’re showing aggression or anger. However, as with their tails and ears, dogs bare their teeth to convey a variety of feelings. Sometimes it can be the result of friendliness or even feelings of submission. In these instances, the dog’s behavior is similar to that of a human smiling, which is intended to convey positivity. Accordingly, a dog showing its teeth could point to a playful mood, signs of affection, or that your pup just considers you its leader.

That being said, dogs can indeed bare their teeth to communicate aggression, discomfort, pain, or fear. For example, if they feel threatened, they might show their teeth as a warning sign. To understand the nuance of what your dog is trying to convey, it’s important to consider the context of their actions.

What does it mean when my dog is panting?

Panting is a commonly observed behavior of dogs. It’s their main way of dealing with excess body heat, in a similar way to humans sweating. Panting helps expel moisture and heat from your dog’s tongue, lungs, and mouth. As a result, you will normally see a dog pant in a hot environment or after exercise.

However, ongoing panting that has nothing to do with heat loss is abnormal and might indicate a health problem. Your dog could have a health issue if the panting:

In any of the circumstances listed above, contact your vet as soon as possible.

Body Language of a Happy Dog

As explained above, dog mannerisms can mean a wide range of things in different contexts. Similarly, various dog breeds will express feelings in different ways. Nevertheless, there are some general signs that indicate when a dog is happy.

Generally, when a dog is feeling happy it will display the following signs:

When displaying these dog behaviors, your pup is more than likely feeling safe, happy, and relaxed.

Body Language of a Stressed Dog

Dogs that are feeling stressed, scared, threatened, unhappy, or angry will likely show their emotions through a combination of some of the following signs:

When a dog shows a combination of any mannerisms outlined above, there could be something wrong. Proceed with caution and try to be aware of what might be troubling your canine. Additionally, ensure you don’t do anything that makes the dog feel more anxious, uncomfortable, or threatened.

Unless you’re lucky enough to own vast tracts of private land, you’ll likely have to take your dog for walks in public spaces. In these instances, you’ll run into other dog-walkers with their pets. Always watch out for a few signs and signals to ensure everyone’s getting along.

As long as two playful dogs are demonstrating loose mannerisms, it’s likely an indication of a relaxed dog body language. For example, dogs loosely wag their tails to communicate friendliness. Similar feelings are being expressed when their ears are loose, rather than flattened or raised.

Soft facial expressions are similar to loose body language in meaning. They suggest that the dogs are not feeling threatened or aggressive, but rather feel playful and happy. In particular, if mouths are open and relaxed rather than tightly drawn back to show teeth, there’s a good chance they’re feeling positive.

Here's How To Spot If Things Aren't Going Well

There are a few signs to look out for as indicators that dogs are feeling angry, aggressive, or threatened. As previously explained, stiff body language in the form of a rigid dog posture and stiff raised ears is one such sign. A raised head with intense eye contact can similarly suggest dominant dog body language, which is a sign of aggression. If you witness any of these signs, keep the dogs apart from each other.

And there you have it! You’re now better equipped to understand your dog’s body language. Knowing which signs to look out for and what they mean helps to improve communication between you and your pup and creates an even stronger bond than ever before!

What to Feed Your Dog: Recommended Foods & What to Avoid

Returning to the Office Post-Pandemic: Tips for Leaving Your Dog at Home

Flea and Tick Prevention For Dogs

How to Stop a Dog from Shedding

How to Keep a Dog Calm While Grooming

How to Bathe a Dog the Right Way, According to Dog Grooming Experts

What Is Dog Grooming?

Let’s Talk About Coats and Care!

Welcome to the Barkbus Ruff Draft